OBJECTIVE: This study aimed to investigate self-esteem among older adults treated at Basic Health Units (BHU) and associated factors.
METHODS: This cross-sectional study evaluated 654 older people treated at BHUs in the municipality of Maringá, state of Paraná, in Brazil. A sociodemographic questionnaire, the International Physical Activity Questionnaire (IPAQ), and the Rosemberg Self-esteem Scale were used as instruments. The data analysis was performed using the Kolmogorov-Smirnov test, the Spearmans rank correlation, the Chi-squared test and the Binary Logistic Regression.
RESULTS: The results showed a significant association between self-esteem (p < 0.05) and self-perceived health, which is related to going to BHUs, history of falls and near-falls, and the level of physical activity. The logistic regression showed that the older patients with no history of "near-falls are more likely to have good self-esteem as well as very active older adults. Having high self-esteem was significantly correlated with the variables related to the practice of low-intensity and moderate physical activities.
CONCLUSION: It was concluded that health conditions, especially the history of near-falls and physical activity level are factors associated with a higher self-esteem. In addition, the performance of low-intensity and moderate activities is associated with good self-esteem.

Aging is a dynamic and progressive process characterized by physiological, physical and psychological changes, which modify the organism and can cause damages related to the adaptive capacity of older adults, making them more susceptible to the negative adversities oflife.1,2 On the other hand, research empha-sizes that reaching this stage of life with high self-esteem, optimism, and self-control may have a positive effect on longevity.1,3-5

Self-esteem is described as an individuals self-perception to judge his or her abilities in the face of life’s adversities,6 and it is related to factors such as confidence, competence and decision-making.3 It can therefore be characterized as the feeling, appreciation and consideration that a person feels for her/him-self.1 Similarly to quality of life, self-esteem embraces subjective self-perceptions.7 According to the scientific literature, older people with low self-esteem have lower scores on quality of life.8

A study with Canadian older adults found that low levels of self-esteem can predict adverse health outcomes for these population.9 Therefore, knowledge on this subject can subsidize the systematization for taking care of aging adults with low self-esteem.1 In this context, it is important that the health team identifies the factors that may be interfering with the self-esteem of these patients in order to intervene on such aspects and improve their quality of life.

Some authors point to the existence of a negative relationship between self-esteem and advanced age, however it seems to be the behavior of older adults that more strongly defines this relationship.1,10 Studies have shown that going to basic health units (BHUs) and engaging in regular physical activity are some of the favorable attitudes to increase the self-esteem of this population.10-12

On the other hand, it is also necessary to investigate the various factors related to the low self-esteem of these individuals. The possibility of falls, for example, directly and negatively interferes with the daily life of this population, with loss of autonomy and independence, even if it occurs for a limited time.2 Falls are increasingly causing injuries in geriatric patients, which means high treatment costs,13 and are defined as unintentional events that result in the person coming to rest on the ground or another lower level.2 After its occurrence, older people become more susceptible to low self-esteem in the performance of their daily activities, either due to fear of new episodes of falls or to other physical, psychological or social factors.5 There may also be a progressive impairment of the functional capacity, which can make these patients more vulnerable and concerned with the risk of institutionalization and even death.2,5,12

Among the Brazilian national health policies for the population aged 60 and over, three priorities stand out: health of older adults, health promotion, and strengthening of Basic Care.14 However, there is still little research on the self-esteem of geriatric patients who regularly attend BHUs, which intensifies the need to study this event, given its high impact on the health system. Therefore, this study aimed at contributing to the expansion of knowledge in this field in order to subsidize strategies of action that take into account the factors that may interfere with the quality of life, based on the maintenance of self-esteem in older adults. From this perspective, the present study aimed at investigating the factors associated with the self-esteem of older people assisted at the BHU in the city of Maringá, Paraná.

According to data obtained from the Secretary of State for Health and Social Care of Maringá-PR in 2016, the target population consisted of 42 258 older adults. The StatDisk software version 8.4 was used in order to obtain the sample calculation. Therefore, the initial sample to be considered was of 595 elderly people; to avoid possible losses, 10% of this value was added, and the final sample embraced 654 men and women, considering a confidence level of 95% and 4% of margin of error.

Considering inclusion, older adults of both sexes, aged 60 and over, with preserved speech and hearing capacity, were invited, which allowed applying the instruments of this study. Furthermore, the Mini Mental State Examination (MMSE) was used to exclude the elderly with significant cognitive deficits.15,16

The Rosenberg’s Self-esteem Scale3 was used to assess the individual’s perception of its own self-esteem. It is com-posed by 10 statements, answered in a 4-point Likert-type scale (1 = totally disagree to 4 = totally agree).

This is an epidemiological descriptive cross-sectional study conducted with the approval of the Research Ethics Committee of the University Center of Maringá (UNICESUMAR) under Opinion 1.626.966/2016.

In accordance with the guidelines for human research described in Resolution 196/96 of the Brazilian National Health Council, volunteers were approached at the BHUs by the researcher in charge or by the research team. They were informed about the justification, purposes and procedures to be performed. After that, those who accepted to participate in the study and signed the Free Informed Consent Form (FICF) were submitted to data collection.

Data analysis was conducted by using the SPSS 22.0 Software with a descriptive inferential statistics approach. Frequency and percentage were used as descriptive measures for the categorical variables. Considering the numerical variables, the data normality was initially assessed by using Kolmogorov-Smirnov test. Since the data did not show a normal distribution, Median (Md) and Quartiles (Q1; Q3) were used to feature the results. The correlation between physical activity level and self-esteem was verified by using Spearman coefficient. Pearson’s Chi-squared test (%2) was used to verify the possible associations of the sociodemographic variables and health condition with self-esteem. The Binary logistic regression (crude and adjusted analysis) was used to evaluate the magnitude of the associations of socio-demographic variables and health condition (independent variables) with good self-esteem (dependent variable). For modeling the regression analysis, only the variables that showed a significance level equal to or less than 0.20 in the chi-squared test were considered, which were simultaneously inserted in a single block without withdrawal after analysis. Each exploratory variable that showed a p < 0.05 according to the Wald test was considered to be associated with the study outcome. The model adjustment was verified by using the Hosmer-Lemeshow test. 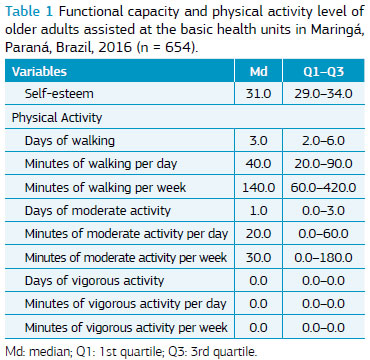 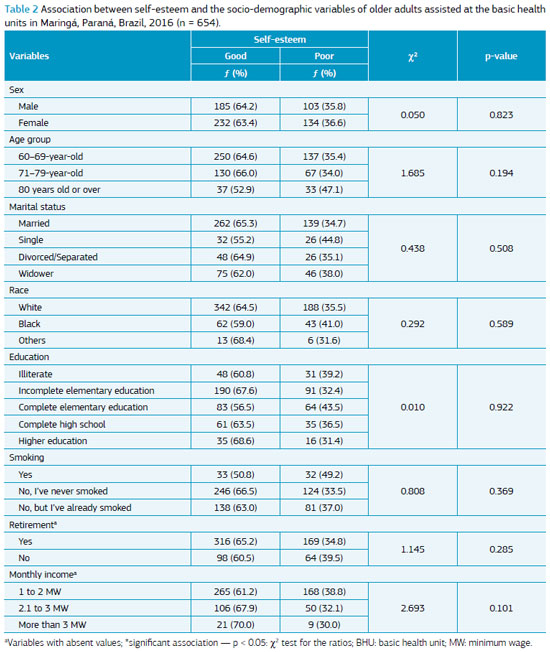 When assessing the association between self-esteem and health condition (Table 3), a significant and positive association was found with self-perceived health (p = 0.035), the reason for going to the BHU (p = 0.044), history of falls (p = 0.011) and near falls (p = 0.001) in the last six months, and the physical activity level (p = 0.001). It means that there is a greater proportion of older adults with good self-esteem who go to the BHU for a medical appointment, did not have falls or near falls and are physically very active/active. 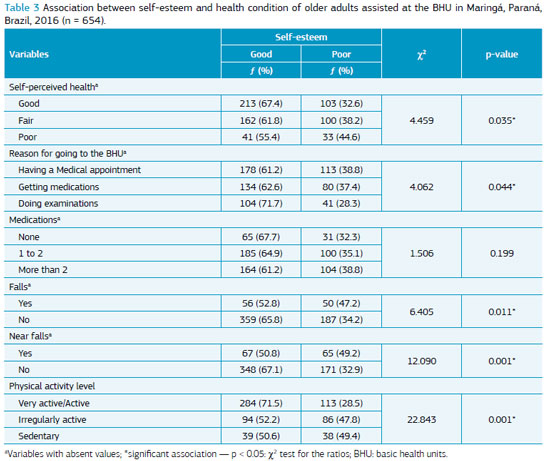 The crude odds ratios of the binary logistic regression analysis supported the results of the Chi-squared test (Table 4). When the analysis was adjusted for all the variables of the model, a significant association of good self-esteem with the history of near falls (p = 0.004) and the physical activity level (p = 0.001) was seen. It is worth mentioning that the patients who had a history of near falls in the last 6 months showed 1.889 [95%CI 1.219-2.925] times more chances to have good self-esteem, when compared to the ones who had a history of near falls. The physical activity level was seen as a protection factor, that is, the very active/active patients have 57 and 63% more chances to show good self-esteem when compared to the irregularly active and sedentary elderly subjects, respectively. 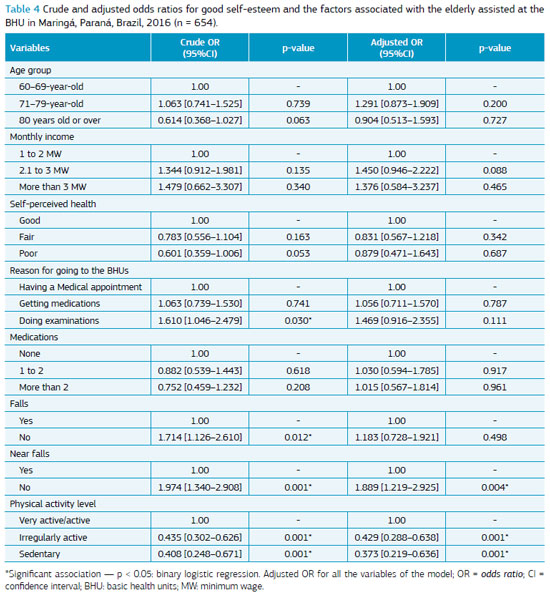 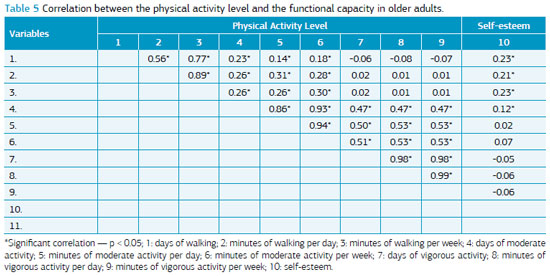 Such findings seem to indicate that the act of performing light and moderate activities is associated with good self-esteem.

The present study showed that approximately 64% of older patients had good self-esteem, which corroborates with the research by Cozin et al.18 which indicated that 70% of the Brazilian geriatric patients evaluated by the authors had high self-esteem. This is possibly due to the fact that during the collection period the older adults went alone to the evaluation site by public or private transportation, and some of them still worked, which characterizes their independence. It is worth mentioning that the older people with higher values of self-esteem were 85-89 years old. Another more recent study, which used the same self-esteem evaluation tool as that of the present paper, showed that approximately 92% of the patients evaluated had good self-esteem (high and normal).19

Another interesting aspect is that, in the present study, most patients who had good self-esteem, in absolute terms, were younger. However, this difference was not significant (p = 0.187). This is opposite to the study mentioned above, which showed that the younger geriatric patients (60-69-year-old) had lower self-esteem when compared to older people (over 70 years of age). According to the authors, this can be explained by the fact that there is a certain period of time (years) until the individual adapts him/herself to the new phase of life.18,20 Other researchers, however, as in the present study, did not find significant differences related to self-esteem among the different age groups (60-69-yer-old, 70-79-year-old, 80 years old and over).19 In addition, a population-based study performed in the Brazilian state of Minas Gerais showed that the geriatric patients with the worst levels of self-esteem were the older ones.10

Considering the demographic variables (sex, marital status, education, monthly income, age group), there was no association with self-esteem in the present study, which corroborates with previous findings regarding monthly income, age group, marital status, and sex.18,19 However, other studies10,19 found a significant association between self-esteem and education, that is, older adults with higher education showed higher self-esteem values. According to the authors, the older patients with a higher education level shall have a greater sense of safety and dignity in relation to different social relationships, which may lead to greater self-esteem. Regarding marital status, although no association was found in this paper or in the abovementioned studies,19,20 in absolute values, it can be seen that 65% of the geriatric patients who showed good self-esteem were married, which is in agreement with studies from the 90’s. Such studies indicated that being married or living with another individual can provide a greater sense of safety, which, in turn, may positively reflect on self-esteem.21,22 Nevertheless, more recent information has, in fact, showed that older people who live with other individuals (family) usually have higher self-esteem when compared to older individuals living alone.23

In addition, considering health condition, the present study showed that most geriatric patients (67%) with good self-esteem had good self-perception of health. These results are similar to those found in the literature.19,20

The present study has limitations. Due to its experimental design (transversal), it is not possible to infer causal effects among the variables assessed herein. Another limiting aspect is the fact that, despite the considerable size of the sample analyzed, it is not regionally or even nation-ally representative, which makes it difficult to generalize the information.

From a practical standpoint, this study provides health professionals with subsidies to propose strategies and actions of bodily practices and physical activities in primary care that promote the mobility, motricity and self-esteem of older adults.