As aging progresses, there is a consequent increase in chronic diseases, such as osteoporosis and osteopenia, and vitamin D (cholecalciferol) supplementation is routinely prescribed. However, indiscriminate use of this supplement can lead to intoxication and systemic changes. Seeking to raise awareness among prescribing physicians and especially older patients, the purpose of this case report was to describe the systemic symptoms and damage that can occur from intoxication due to uncontrolled use of vitamin D, such as hypercalcemia and kidney injury. This report describes the case of an older woman who reported using a cholecalciferol- containing formula for ten years to treat osteoarthritis. She arrived at the hospital with weight loss, acute kidney "injury and hypercalcemia. After ruling out neoplastic diseases, she was diagnosed with vitamin D poisoning. The symptoms and laboratory results improved after treatment. Based on this report, we conclude that geriatricians play a key role in demystifying the use of vitamins and should only prescribe them when medically indicated.

Vitamin D supplementation is a treatment for chronic diseases such as osteoporosis, osteopenia, osteomalacia, secondary hyperparathyroidism, and conditions involved in morbidity and mortality.3

As aging progresses, vitamin D supplementation becomes more frequent and, consequently, so do cases of intoxication.4

Since a diagnosis of vitamin D poisoning is unusual in cases of hypercalcemia, different hypotheses have usually been proposed in the differential diagnosis, especially prior to the advent of vitamin supplementation. Primary hyperparathyroidism and multiple myeloma are among such diagnoses.4

According to Shah et al.,5 vitamin D levels can be considered deficient when the serum 25-hydroxyvitamin D [25(OH)D] level is less than 12 ng/mL and insufficient when less than 30 ng/mL.

The Brazilian Society of Endocrinology and Metabology (SBEM) announced that serum 25(OH)D values above 20 ng/mL should be considered normal for the healthy population; prior to that declaration, levels above 30 ng/mL had been considered normal. For at-risk groups, such as older adults, patients with osteoporosis, osteomalacia, rickets, secondary hyperparathyroidism, inflammatory, autoimmune, chronic renal and precancerous diseases, the recommended value is 30 to 60 ng/mL. Values between 10 and 20 ng/mL increase the risk of osteoporosis and fractures. Levels above 100 ng/mL are considered at risk for poisoning.6,7

Vitamin D poisoning is rare, but due to indiscriminate use it has been occurring more frequently. The main form of intoxication can be caused by inadvertent or intentional ingestion of excessively high doses.8,9 Daily doses above 50,000 IU increase 25(OH)D levels to over 150 ng/mL and are associated with hypercalcemia and hyperphosphatemia.9

The main symptoms of vitamin D poisoning are nausea, vomiting, weakness and altered level of consciousness. Polyuria, excessive thirst, and other manifestations, such as painful periarticular calcification, nephrocalcinosis, hypertension, renal failure, band keratopathy, and hearing loss have been reported, as have arrhythmias and ST-segment elevations that mimic myocardial infarction (Table 1).10,11 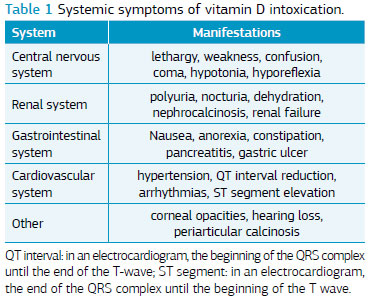 An 80-year-old white woman from São Paulo with a personal history of hypertension, diffuse arthrosis and insomnia was admitted to the emergency room complaining of malaise and weight loss of 10 kg in the last 15 days associated with anorexia, weakness, nausea, vomiting, isolated episodes of palpitations and adynamia. She had sought care twice in the last two weeks. On the first occasion, she was discharged after administration of multivitamins due to the complaint of weakness. When the symptoms persisted, she returned to the emergency room. Laboratory examinations revealed renal failure, and the patient was hospitalized for investigation.

Upon initial examination the patient’s blood pressure was 140/80 mmHg, she weighed 87 kg and had a heart rate of 75 bpm. The electrocardiogram was normal and chest X-ray showed no significant changes. Laboratory examinations confirmed renal dysfunction and severe hypercalcemia: urea 92 mg/dL, creatinine 3.5 mg/dL, ionized calcium 2.02 mmol/L, and albumin 3.7 g/dL. The patient was treated with saline hydration (500 ml every 6 hours intravenously) and furosemide (one ampule every 6 hours). Hypercalcemia was controlled through administration of zoledronic acid. During the patient’s hospitalization, we investigated for bone lysis, multiple myeloma, and hyperparathyroidism and the test results were normal. It was found that the patient had been using a medication prescribed about 10 years ago for chronic pain due to severe osteoarthritis. She had not reported this medication earlier because she did not think it was important, since the product contained "natural ingredients". The medication consisted of ginkgo biloba (80 mg), type II collagen (40 mg), glucosamine sulfate (1.5 g), and vitamin D (2,000 IU), taken once a day.

The initial vitamin D levels were considered immeasurable, i.e., they were so high that they could not be determined using the normal methodology.

After therapeutic measures, the patient’s renal function stabilized, serum calcium levels normalized, and there was clinicai improvement, including better appetite and disposition. She was discharged from the hospital and followed up as an outpatient: serum vitamin D levels progressively decreased and renal function was reestablished (Table 2).

Vitamin D supplementation has become more frequent due to the increasing age of the population, and its deficiency is related to more prevalent chronic diseases in the elderly.

Moreover, we did not analyze the capsules to rule out overdose, since she was using a compounded drug product. A number of reports have shown that there is a greater possibility of poisoning in compounded drugs, which has led the pharmaceutical industry to develop capsules with different doses of vitamin D to facilitate use.

Daily doses of vitamin D can range from 800 to 4,000 IU per day, but higher doses cause nephrotoxicity. Although in this case the daily dose would not have been toxic, there may have been genetic factors that determined greater susceptibility to vitamin D exposure. These factors could be associated with the rs7041 and rs4588 polymorphisms of the vitamin D-binding protein.12 No genetic study was performed to determine carrier protein and enzyme deficits in the patient, although it was observed that after the cholecalciferol formula was discontinued, there was clinical improvement and calcium levels and renal function recovered.

This report describes the case of an elderly woman who presented symptoms compatible with vitamin D poisoning, which had been overused for 10 years. Geriatricians should be aware of situations like this since they are asked on a daily basis to prescribe multivitamins. They should refute the idea that vitamins are the solution to most symptoms and explain to patients that they should be used only when well indicated and under medical guidance to avoid iatrogenic diseases that could compromise patients’ well-being or even their lives.